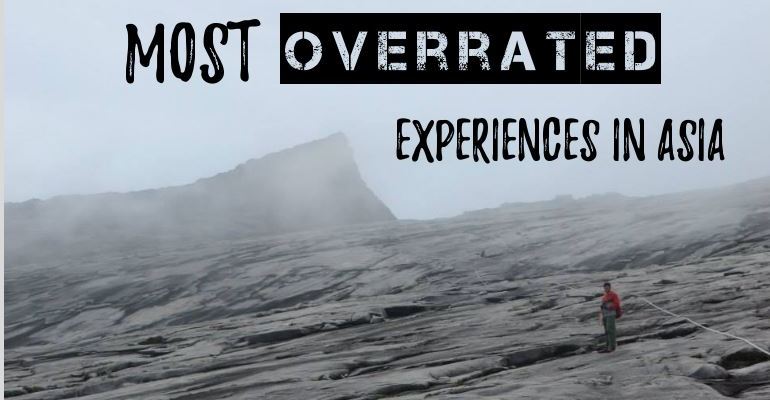 While most of our travel experiences over the past three years have been nothing short of incredible (thanks in large part to meticulous research and planning), occasionally, we partake in something that for one reason or another, simply failed to live up to the expectations.  Below is a (short) list of these overrated Asian experiences.

The Food in Taiwan

Although we visited Taiwan for many reasons, one of the primary ones was for its food, which CNN proclaimed shortly before our trip there to be the best food in the world.  In our first stop, Taipei, the food was indeed very good and abundantly available.  But once we left the capital, we were underwhelmed, and even worse, often found ourselves hungry and searching for food, something we didn’t think possible in Asia.

In fact, one day, we rented a motorbike from Hualien on the East Coast of Taiwan and drove up and down the coast which is supposed to be one of the most memorable experiences in Taiwan.  And while the scenery was beautiful (we went South on the ocean and then back North a little inland through the mountains), at one point, when it was time for lunch, we went several hours without seeing anywhere to get a meal.  Eventually we settled for an overpriced seafood restaurant in a fishing port, but how there was no local food around was bewildering.  Ironically, the day before, I asked Stefanie what she wanted for lunch the following day during our motorbike trip, and she said anything but 7-11 since we had just had it so much for lunch in Japan the few weeks before when we were always in transit.  Fast forward to the next day, and we would have done anything  to find a 7-11 for lunch.

Things got a little better as we headed West to Tainan and Kaohsiung, but still nowhere on par with the food in Thailand or some other places in Asia we’ve been to (e.g., Philippines, Vietnam, Indonesia, Japan and China).  I’m not sure who took that CNN poll, but perhaps they never made it out of Taipei.

Supposedly the highest mountain in maritime SE Asia (whatever that means), Mt. Kinabalu in Sabah, Borneo (aka Eastern Malaysia) was at the top of our list of things to do on RTW 2.0.  In fact, since we had to book our permits months in advance, we pretty much booked our entire trip around it, along with Sipadan (a top 5 in the world scuba diving destination which was anything but overrated), also in Sabah.  Besides the fact that almost the entire trek is up a staircase (as opposed to natural terrain), the majority of the trek is through a forest with very tall trees which results in very little view, if any, of the surrounding area.

The only scenery you really get is during the last few hours of the trek, above “Base Camp,” but when we went, it was so cloudy and misty that we couldn’t see more than a few feet in front of us.  But the worst part of the experience was the cost.  At $250 per person, for what’s essentially a 1 day trek, this has to be one of the poorest value deals in SE Asia.  Even worse, the majority of your $250 goes to the lone accommodation near the top of the mountain, which consists of numerous dorm rooms which sleep 6-8 people per room.

In hindsight, we probably could have done the trek in a single day as we saw several other travelers do the same  while we were there, but the guidebooks say only the fittest of the fit should try this (and you can’t get your permit in advance to do this and we were worried there wouldn’t be any available on our trekking day), so we decided to play it safe and spend the night. To make matters worse, we were so far ahead of schedule on our way up that we decided to summit the 1st day rather than wait until the middle of the night when most trekkers try to summit.  To our discredit, that may have been why our views weren’t so great, but the alternative of sitting around a mountaintop freezing all afternoon while waiting to summit in the middle of the night when it would only be colder didn’t seem like a good option either.  Plus, that would have set us back another half a day and we were already a little short on time in Borneo.

All told, it was a pretty disappointing, and very expensive, 1-2 day experience.  If we could do it again, we would have either tried to summit and get down in a single day (thereby avoiding the ridiculous dorm room fee), or foregone it altogether.

Though I realize we’re in the minority here, based on our limited one week experience, and for various reasons explained below, we found Bali to be a bit overrated, particularly when compared to several other amazing places we visited in Indonesia.  For starters, the most popular beaches in Bali, Kuta Beach and Seminyak, are so overrun with local touts trying to sell you everything from souvenirs, surfboard rentals, transport to the next beach, and frankly, magic mushrooms (and other similar recreational activities), that it hardly feels like vacation.  Instead, it reminded us a lot of India, where we were so overwhelmed by the local touts that we ended up getting into several verbal altercations, and spent the majority of our time trying to avoid any interaction with the local shops, rather than window (or actual) shopping which we frequently like to do while on vacation, particularly in beach towns.  Seminyak, more upscale than Kuta Beach and just down the road, was slightly better, but we were so put off by Kuta Beach that it left a bad taste in our mouths for the rest of our time in Bali.

The other big Bali draw, Ubud, the cultural capital of the island and an hour or two inland as opposed to on the beach, was slightly better than the beaches, but still far more touristy and filled with pushy vendors than most other places we’ve visited in SE Asia.  And though admittedly we didn’t have time to visit some of the lesser known parts of the very big island, the one day we did venture out on our own, not surprisingly, we were pulled over by the police on our motorbike and ticketed for not having the proper documentation (despite being assured by our motorbike rental place that we’d be fine).  All told, Bali left us very disappointed, but I think if we did it again and this time visited places other than the  uber popular Kuta Beach/Seminyak and Ubud, we’d have a far better experience.

However, when considering the abundance of other wonderful nearby places to Bali, I’m surprised all the hype surrounding it.  For example, the Gili Islands are just an hour away by boat and are far more chill/relaxed, just as beautiful and much more manageable in terms of size/getting around.  Lombok, a stone’s throw away from the Gili Islands, while lacking the stunning beaches and cultural allure of Ubud, has the sensational Gunung Rinjani (3 day volcano trek where you get to sleep on the crater rim), which merits a trip there all by itself.  Further east of there lies Flores and the world-famous Komodo Island, which while we didn’t have time to visit, gets rave reviews for its scuba diving and of course its native inhabitants (the komodo dragons).  Finally, West of Bali lies Java which is home to another stunning volcano, Mt. Bromo, a quirky yet lovely town in Yogyakarta, and the underrated capital, Jakarta.  All told, if you’re visiting Indonesia, while a trip to Bali is somewhat compulsory, don’t limit yourself to the two main beaches and Ubud, and also try to save some time for the lesser known, but equally or perhaps even more rewarding surrounding places.

3 thoughts on “Most Overrated Experiences in Asia”